For the great majority of black folks, “woke” has zero to do with the alphabet mafia, feminism or anything other than black community issues and history.  The word “woke” was originally used to exclusively refer to “an awareness and understanding of the issues of racism and discrimination and their effect on black communities in the United States of America.”

It NEVER included abortion, issues of concern to the alphabet mafia or anything other than black American community issues. Mass incarceration, disproportionate/unjust policing and sentencing practices, racism without visible racists and the impact of systems, policies and laws (past and present) on black communities.

What has happened is a form of cultural appropriation. Specifically white liberals decided to water down the term to “social justice issues” and piggyback their other issues under the label (the same way they’ve reduced African-Americans to ‘BIPOC’ and ‘People of Color’). “Social justice” sounds benign until you see specifically what they decided to add to black community issues. They have to do this because simply trying to push the alphabet mafia agendas by themselves would not have gained traction if they didn’t run in through the public square on the backs of black folks from the civil rights era. Liberal folks who hijack “woke” to mean more than what it originally meant that are dishonest.

Conservative folks who use “woke” in a pejorative fashion are being intellectually lazy at best. I’m giving some folks the benefit of the doubt. I recognize that way too many conservative folks are ignorant of any history other than the sanitized mess they’ve been taught. Some are simply regurgitating the same stuff they already feed themselves via conservative media (radio, tv, internet, blogs).

While some folks are ready to have actual discussions and be truthful, others are more committed to their political position than to telling the truth and (in the case of folks claiming to be Christians) living in unity with other believers.

For example, mention redlining and the FHA, dig up bank documents and government documents and they don’t have an answer other than name-calling.  Start talking about the lasting systemic effects of it that persist as a result of it (we’re still seeing major banks settling redlining lawsuits in 2022)  and they’ll quickly move the goalposts or ignore your argument altogether and jump to something else in order to ‘win the battle’.  As I’ve said before, they can recognize the effects and legacy that abortion on demand has caused in the US, but they would like everyone to believe that black folks are ‘chasing ghosts’ since the Civil Rights Act and Fair Housing Act were signed.

This is perfectly in line with Satan’s usual tactics. He appeals to the fear of cultural change in conservatives and some of them will exchange truthfulness for ‘any means necessary’ to maintain the status quo even if it involves lying and the most unchristian behaviors in their responses.  Satan doesn’t have an issue with a conservatively moral society; remember 2 Cor. 11 – he and his angels have no issue appearing as angels of light.

Consider that carefully, conservative friends who are Christians. You JUST saw the whole ‘angel of light’ thing blow up in your faces with James Lindsay. Aligning yourself with folks just because they hold 4-5 things in common with you and doing so AGAINST your brethren is foolish and disobedient to John 13:34-35/Lev. 19:18.

Liberal-leaning friends who are Christians aren’t off the hook. There is a tendency in the black community to say “Hey, at least they [liberals] are pretending to care. We can get more done with them and at least they treat us like human beings. We can probably work out something mutually beneficial and ignore the rest of what the 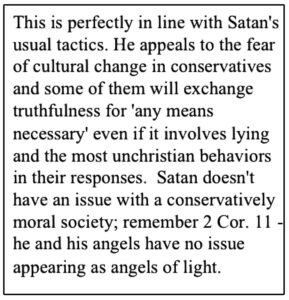 progressive social culture bring along with them.”

Congratulations. You’re doing the same thing that conservative Christians have been doing with secular conservatives. Trump, for example, has never had a problem with the L, G or B and just had some of them over at Mar-a-lago celebrating the RFM Act being signed into law.

Once you grasp that Satan can and does work through both self-righteousness (Luke 18:9-14) and self-indulgence (Romans 1:18-32), it will dawn on you that being in a ‘culturally Christian’ environment does ZERO to advance the gospel. In fact, many folks in the southern part of the US will acknowledge that “culturally Christian” areas are usually hardest to evangelize because everyone in the culture talks the language of the faith, even if they don’t believe it!

So when these discussions come up, it is somewhat easy to point out errors.  Folks who haven’t had to deal with racism (personal, institutional or systemic) may love hearing themselves talk/tweet and treat it like every other thing they’ve never had to deal with:  a hypothetical and theoretical arguing point (and be amazed and offended when they get called unloving, uncaring and unChristian). And if their audio/intellectual diet consists more of political talking points instead of scripture, they will become just as snarky, brash, abrasive, mocking and verbally abusive as the people they listen to (what you spend time meditating on is what you will become – bad company corrupts good habits).

Even worse, they will think that because they are opposing one form of evil that scripture explicitly condemns that they are “doing God’s work”, when in actually, they are preaching “do not steal” while thinking it ok to rob temples because “pagan worship happens there and their idols don’t exist”.  Paul called out the Jews on this very behavior (again – see Luke 18:9-14) in Romans 2:17-24. The name of God is blasphemed among unbelievers partly because  professing believers don’t do what scripture commands. You cannot be selective or twist scripture (Elijah mocking or the imprecatory Psalms for example) to justify your own personal insults.

A *much* better way forward:

Begin with Acts 6:1-6 – acknowledge the problem instead of trying to explain it away or downplay it…then serve the brethren.  I recognize that some genuine believers are being misled by secular conservatives who have no reason to tell the truth about things that don’t support their ‘side’, so they have no issue lying/telling half the truth to their followers/listeners (a half truth is whole lie). And they will be believed because they’re correct on other issues (so they must be right on everything, right ?).

You are not living in harmony by calling fellow believers in the Lord the equivalent of demons, whores and other terms (anonymous twitter troll and Jeff Durbin, I’m talking about you, but not just you). You absolutely are not ‘weeping with those who weep’ when you decide to drag out the supposed criminal history of a black boy who was murdered by police (or in the case of Ahmaud Arberry, some racist vigilantes).

You are not living in harmony with fellow believers when you refuse to forgive as Christ forgave you (Eph. 4:32), but instead turn that offense against you into impatience, anger/bitterness and eventually “leaving loud” from your “white supremacist church”.  Let’s also be honest about this; there are some churches harboring and hiding some of these people/families because they’ve been “a part of this church forever”.  While there have been some churches that have attempted to enforce church discipline on unrepentant racists, my personal opinion is that there seems to be far too few that will.  And I do recognize that if a believer is having discussions with the elders and the elders refuse to act on blatant and open sin, then the believe is obligated to leave and find a more biblically faithful body (just make sure that whatever you’re calling sin actually is sin).

I’d like to see my brethren do better. I also recognize that there are tares among the wheat who like the culture of conservatism, but have no true desire for Christ or actual Christian fellowship. And these folks have no issue riling up believers against other believers.

This is where Galatians 6:2-10 comes in. A discussion on that passage will be for another day. In the meantime, give these three passages a bit of your personal meditation time in the coming days. “Chew the cud” for a while on each.  Let the Word of God transform your thinking and start to consider the implications carefully for how you interact on social media.